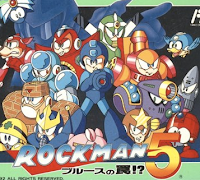 Hot on the heels of Rockman X, Capcom is looking to roll out another classic Rockman adventure for the Wii's Virtual Console. According to Nintendo Japan's newly updated May release schedule, Rockman 5: Blues' Trap?! is set to release on the service this month.

As with all Famicom titles, Rockman 5 will run for 500 Wii Points. An exact release date is still up in the air, but Capcom usually likes to surprise us with these things. Mega Man 5 should also be around the corner any day now, too: the ESRB rated the game not too long ago.

As the classic series nears its end on the Virtual Console, one wonders where Capcom will go from here. X1's sudden debut seems to indicate a transition into re-releasing the SNES/SFC X series titles. Further, we can also hopefully look forward too Rockman 6/7, Rockman & Forte, and RockBoard.

Virtual Console announcements seem to happen upon a moment's notice. Who knows what we'll get next!
Posted by Protodude at 8:51 PM