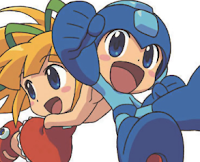 In a bit of interesting news, to say nothing of unexpected, Sony is gearing up to port PSP titles in HD format for the PlayStation 3. Capcom, sure enough, is quick to jump on this new venture with an HD port of Monster Hunter Portable 3rd. Ah, see where I'm going with this?

The PSP is home to, arguably, two of the best Mega Man games in recent years: Mega Man Powered Up and Maverick Hunter X. Received well by fans and the gaming press alike, both titles, unfortunately, failed to find a place in the market, selling far below Capcom's expectations on a global scale. It's easy to play the blame game, but the longstanding theory is that the games simply couldn't find an audience on the PSP, a system that, at the time of both games' release, had very little market share. In the coming years, both titles received new life on PlayStation Network, though only Maverick Hunter X would be available outside of Japan; Powered Up suffered compatibility issues.

We don't have the numbers behind the PSN versions, but it couldn't hurt to give the two games another chance at finding the audience they deserve. The prospect of PSP to PS3 High-definition ports gives rise to an idea that's been in the forefront of many minds since the PSP Remaster program was announcement made yesterday: HD ports of MMPU and MHX.

Aside from Monster Hunter, Capcom has been mum on further plans for the PSP Remaster program. We don't know what they have planned long term, but I think we have a good chance, a very good chance, of getting and HD MMPU/MHX to happen. All it's going to take is a little fan support.

The idea is currently being churned amidst the fanbase: A single Blu-Ray disc housing both Maverick Hunter and Powered Up, complete HD visuals (that applies to "Day of Sigma", too)  Dual Shock 3 support, optional 3D display, and maybe a few extras. A single package boasting two great games at a steal of a price; fans get a chance to play them on the BIG screen, newcomers get a chance to actually play and enjoy them.

If you're interested in HD version of these games, simply raise your voice! You've got two great outlets to voice your opinion: the Ask Capcom forums, and the Suggestion Box. The demand for a revitalized MMPU and MHX is there, it just needs to be directed at the source.

Certainly, we'd all enjoy some sequels out of these two games instead of more ports, but for that to happen, the originals have to be somewhat successful in a financial sense. So, if this is something relevant to your interest, give Capcom a holler. A little demand can go a long way.
Posted by Protodude at 10:09 PM