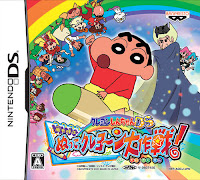 Contrary to popular belief, Inti Creates does more than produce Rockman games. While the Zero series certainly takes the crown as the developer's most successful brand, titles based off of the popular Crayon Shin-Chan franchise come a close second.

Inti proudly holds the rights to produce portable titles based off of the colorful property that is Shin-Chan, a popular character in the east that has often been cited as the "Japanese Bart Simpson." While the character is just now beginning to propagate outside of Japan, Shin-Chan games continue to remain exclusive to Japan, and as such, this neat tidbit of trivia goes mostly unheard of to the rest of the world:  turns out, one Inti developed Shin-Chan game in particular is heavily based off of Rockman gameplay mechanics.

In a bit of a self-homage, Inti Creates included some very familiar Rockman elements into 2007's Crayon Shin-Chan DS, a game released only a year after the original Rockman ZX. At the heart of Shin-Chan DS is the "cosplay system", which bears more than a passing glance to ZX's R.O.C.K System. The cosplay system allows Shin to change into one of five outfits mid-gameplay, each featuring their own unique set of abilities inspired by Rockman.....

Both systems enable the player's character to change, in mid-game, into another form, subsequently taking on that forms unique set of abilities. Vent strikes a heroic pose to initiate his transformation, while Shin, well, Shin merely undresses before the player.

In their standard human forms, ZX protagonists Vent and Aile are capable of crouching to traverse small spaces. Shin's standard form, however, is a bit more versatile. In his every-day attire, Shin can perform a double jump (Rockman Zero 3,4) and dash (Rockman X~ZX). Yes, that is Shin's bare buttocks. Turns out by mooning the player, Shin is capable of running faster. What can I say, it's one of the more famous trademarks of the character.

Wall jumping has been a long standing staple to the Rockman X series and it's two spin-offs. Climbings to heights normally unreachable, Shin dons his henshin hero Action Kamen (known as Action Bastard here in the states) costume to "triangular kick" his way up platforms and plateaus.

Rockman Zero 2 introduced the Chain Rod, a grapple hook used to latch onto walls and ceilings. Shin's Frog suit gives this weapon a nod via its elastic tongue, capable of performing the same task albeit at greater distances.

Shin's Elephant Costume houses most of the abilities of Rockman Zero 3's Chain Rod. Using his trunk, Shin can propel objects and foes forward, or suck them in closer. Using a set of button combinations, can launch himself higher in the air, a maneuver similar to the Recoil Rod's "hidden" pogo-stick ability. The Elephant Costume, like Zero 4's Z-Knuckle, enables Shin to hang and dangle himself from ledges and vines.

Taking a cue from Rockman ZX's Model HX, Shin's flying squirrel costume grants the player momentary flight. By catching updrafts, Shin can propel himself to even greater heights. It's also possible to use the updrafts to keep flight continuous without touching down.

As a nod to ZX's Model LX, Shin's Penguin lets players swim and dash at high speeds in water. Of all his costumes, this one is the fastest and seemingly invulnerable to spikes.

There's a handful of other superficial similarities between Shin Chan DS and Inti's Rockman titles; in fact, you can even find some ZX graphical assets within Shin DS' code!

Future Shin Chan DS titles would down play the cosplay system and Rockman mechanics entirely. Maneuvers integral to traversing stages, dashing and wall climbing, remained, while the abilities of the costumes were relegated into player controlled vehicles (submarine, air plane), and other playable characters.

Inti, clearly, was basing the game heavily around their flagship property. While some could attribute this to laziness, Shin Chan DS, in my eyes at least, stands firm as a homage to the games that made Inti Creates what they are today. The game itself is a parody of Rockman ZX and its sister series right down to the core mechanics.

Source: Past Vision
Posted by Protodude at 12:07 PM