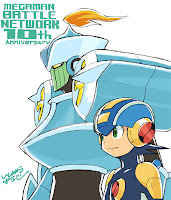 A short while back, Capcom Unity asked fans to submit any and all questions they might have for the Mega Man Battle Network development team as a means to commemorate the series' 10th anniversary. Though it took a little while, Capcom has revealed select answers from series artist Yuji Ishuhara and series scenario planner Masakazu Eguchi. A portion of the article below!

---------------------------
Q: (AkuKnives) Ooooh, I have a question! The Battle Network Series was of course, highly focused on the internet, but the games themselves weren't really capable of going online. Now that wifi is something that is widely available as opposed to 10 years ago, even our handheld consoles can go online. Were there any directions you would've liked to take the series, but couldn't due to the technology at the time, that you could perhaps do now?

With applications like FourSquare and Facebook check-ins using location data, an Online Battle System could also use location information in interesting ways to automatically generate some pretty interesting online battle environments. Any thoughts?

A: (Eguchi) We did have Wi-Fi battles in Mega Man Starforce, but it is something we had always wanted to do with Battle Network as well. We also had some other ideas, like an online MMO where people’s Navis could commune. I also used to dream of having a real-life Navi like Mega Man in Battle Network, that people could really communicate with.
---------------------------

All sorts of other neat tidbits can be found at the complete article here. Unfortunately, not all of the questions could be tackled-- there simply wasn't enough time. Nevertheless, congratulations to those who had their questions answered!
Posted by Protodude at 7:33 PM