This past weekend in Akihabara, fans gathered at Yodobashi Camera to indulge in the sale of a number of  Rockman-themed goods and paraphernalia. Amidst the merchandise, Bandai was promoting their newly released D-Arts Rockman X action figure and showing off glimpses of D-Arts Zero. Adorning the display, the following banner: 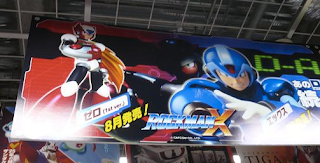 Looming in the background is--what appears to be--X striking a pose in his 'First Armor' from Rockman X1. The dead giveaway is the extended shoulder piece and visible portions of white armor. The silhouette itself, of course, bears some resemblance to the real thing. While it has been long speculated pieces of X's First Armor would be included as accessories in D-Arts X's packaging, this seems to suggest the armor will be an entirely new figure.

A Zero variant is another potential figure in the works. The banner identifies the current D-Arts Zero as "1st Version", which suggests the notion that a second variation is in the works. Zero V2 would seemingly be based of of his appearance in the latter X titles, which would include his famous Z-Saber and squared-off shoulder pads. V1, slated for release later this fall, is distinguished by its spherical shoulders and Z-Buster (i.e Zero's X1 appearance).

Personally, I think there's more credibility towards a First Armor X figure -- after all, this wouldn't be the first time it was teased. The whole "1st Version" thing can also be taken at face value; it is "Zero's first version", and not necessarily the first of more Zero variants.

I'll run this by my Bandai guy. I can't guarantee a response, but if the above speculation is true, I'm certain we'll be hearing an official word or two in the very near future.