Withheld Artwork: Siblings Through The Seasons

As a die-hard fan, I expected a bit more out of Mega Man and Mega Man X: Official Complete Works. Don't get me wrong, both books are excellent, all-in-one sources for official and conceptual artwork, but each lacks in terms of the obscure. For example, where was the Mega Missions trading card art in MMXOCW? The gashapon packaging illustrations in MMOCW? The truckloads upon truckloads of CFC artwork? 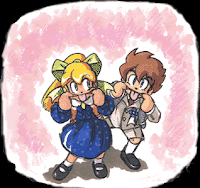 A considerable amount of official materials have been left out of both books; which raises the question if Capcom simply lost the original prints, or if they're intentionally withholding materials for future artbooks. Some of the rarest pieces, a series of seasonal themed images drawn by Shinsuke Komaki for Capcom's defunct Cyber Channel, seem to suggest the latter. Being a major MMOCW contributor, it's a mystery why these pics were left out; however, we may yet see them again.

A couple months back, through a bit of phone tag, I came in contact with Komaki. A personal fan of his work, I attempted to see if I could squeeze out some rare goods, using the above pieces as examples. Although honored to have an admirer in the West, he expressed no desire to release his work publicly, at least, for the time being. Komaki let slip that his "unreleased pieces" were currently under review for a new Rockman artbook. He didn't say much else, but heavily implied (through some minor broken English), a new classic series artbook was underway as of February 2011.

We've yet to hear of such a project officially, but with the series' 25th anniversary on the horizon, an influx of homage and tributary related projects are expected. A new artbook would not be surprising in the least; given how successful the OCW books are domestically and abroad, Capcom would be crazy not to put out more books.

We'll watch where this one goes, but hey, I'm all for another OCW, albeit one a bit more "complete."