Have A Look At Some Cancelled Jazwares Figures


Digging through some of my files earlier today I stumbled upon these photos from Toy Fair 2005: a slew of unreleased Jazwares Mega Man toys. Yes, these bad boys were highly anticipated back then; but alas, they never made it to market.

Multi-colored six-inch classic Mega Man. According to my notes, these (and the following products) were scheduled for release throughout 2005.

Proposed Retro Roto wave 2 AND the rarely seen wave 3 concepts. Looks like Bass was set to be included for the wave 2 line, and Metal Man and Skull Man for wave 3. Unfortunately, unlike the unreleased Ice Man and Wood Man, we don't have any photos of the actual toys for Bass, Metal and Skull. It's safe to assume they never made it off the drawing board. 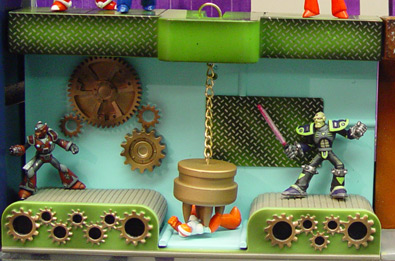 Zero vs. Sigma play set. Curiously, the toys feature a rather interesting gritty aesthetic that's a tad out of place with Jazware's other Mega Man toys. What's up with the impaled classic Mega Man? No idea. (OMG, Cataclysm theory!)

Hankering for more canceled goods? You can check out plenty more scrapped product after the break. Hit the jump! 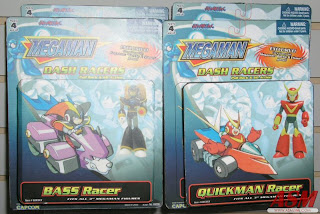 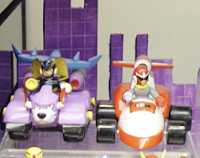 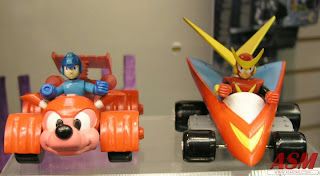 "Dash Racers" -- toys based off of Mega Man Battle & Chase. The prototype packaging indicates these were those fun little "pull-back" toys: gesture the mobile backwards, and away it goes! 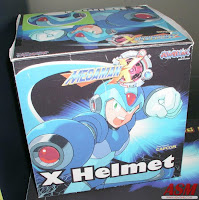 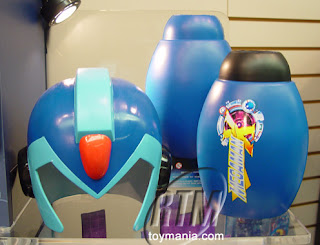 Mega Man X play-helmet. The X Buster did release, but in extremely limited quantities. Occasionally pops up on Ebay. 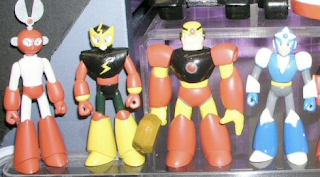 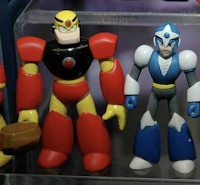 Canceled Wave 5 six-inch figures. Pirate Man's a pretty obscure choice for a toy, wouldn't you say? At the far right is a real interesting concept... seems like Jazwares was toying with the notion of a Ride Armor/Mega Man X figure.  X8 Vile is tucked away in the back there, and it looks like they were prepping for a second Command Mission X, which included some kind of shurikens or something. A prototype of Mega Man Volnutt recently surfaced, actually. 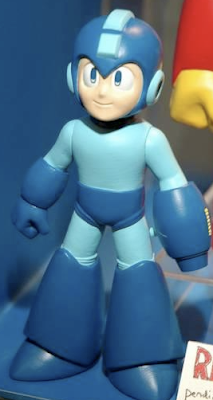 A re-sculpted Retro Roto Mega Man with a slightly alternate posture and face. This guy was original planned for release in late 2005. Apparently, the original sculpt (released earlier that year) would have been phased out in favor of this one. 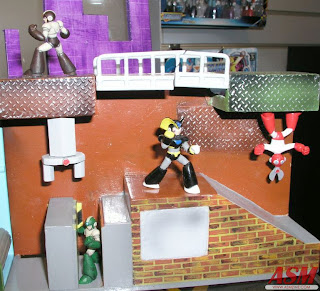 Another play set featuring two very stylized Mega Men and miniature Bass and Cut Man. Intended or not, it looks like the bridge is collapsible. 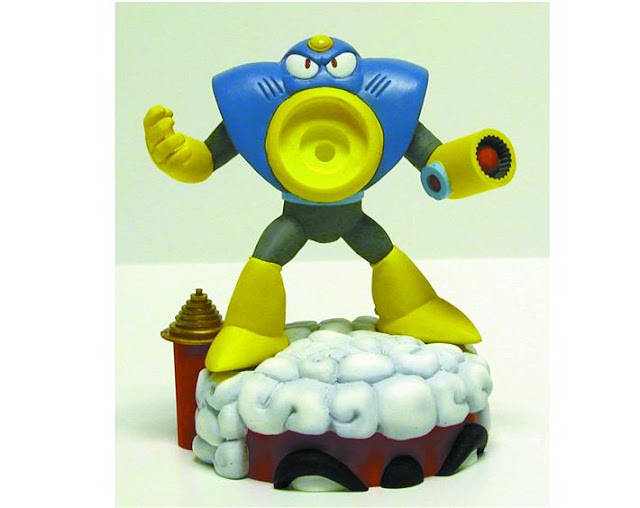 Last but not least, the Air Man resin statue. I believe this was going to be sold as a premium item only at Jazware's official online store. 'Twas the most expensive Mega Man item ever offered by Jazwares: $39.99.

A huge factor contributing to the cancellation of these products was the fact that nobody was buying the then-currently available toys. Jazwares simply over anticipated: they expected their Mega Man line to be a hit with consumers and planned for far too many products. In the end, retailers refused to stock any new Mega Man products by 2006ish, save for the Retro Rotos whose popularity grew and grew.

However unfortunate that may be, there's hope we may see some of these items in due time. Jazwares hasn't said much about their new 2011 products since then, but as soon as I hear something, I'll let you know.

Previously featured canceled toys can be seen here and here.
Posted by Protodude at 9:53 PM