The June issue of Game Informer is running a lengthy preview for Marvel Vs. Capcom 3; and while there isn't any confirmation of playable Mega Man characters yet, a single screenshot alludes to the possibility: 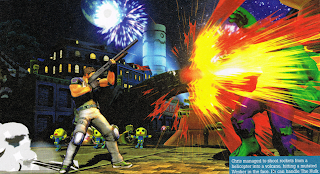 Yup, those are Servbots -- Servbots running amok in the background of a stage. Make of it what you will, but their presence certainly raises the likelihood of someone from the Mega Man universe appearing as a fighter, maybe even someone from Legends (the return of Tron Bonne?).

UPDATE:  The magazine has another screenshot of interest which features Tron sitting idly in the background of the same stage: 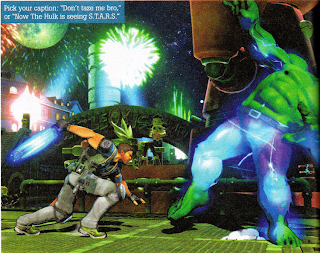 Background characters in Capcom fighting games are usually just limited to cameo appearances, so chances are she won't be playable.

Furthermore, thanks to this new image, we can confirm that this stage is indeed Kattelox Island from Mega Man Legends 1, now known as "Cattleox Island", according to the banner behind Tron.  From the looks of it, the island has seen a significant re-design. By the way, is that brother Teisel Bonne sitting next to Tron? He's obscured by Chris, but that sure does look like his spiky hair...