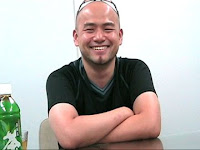 Platinum Games' Hideki Kamiya and creator of Bayonetta (and the likes of Okami, Viewtiful Joe) would really like to create a Mega Man game, this according to a series of tweets between Kamiya and Capcom's Shu Takumi.

Kamiya's desire to have a hand in the Mega Man series stems back to his high school days in which he participated in one of Capcom's Robot Master design contests. His submissions, Planet Man and Aqua Man (no relation to MM8's Aqua Man) didn't win, unfortunately. Now a seasoned game designer, Kamiya has hopes of developing a Rockman game of his very own.

Making a Mega Man game for Capcom isn't his only dream project. Weeks earlier, Kamiya expressed an interest in developing a Star Fox game for Nintendo, preferably, be forced to make one...at gunpoint.

Full story at Andriasang
Posted by Protodude at 2:26 AM