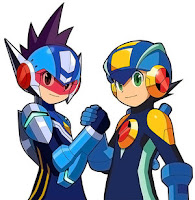 It's that time of the year again. June 19th marks the opening day of the Japanese summer World Hobby Fair, and according to 4Gamer, Capcom looks to be one of the event's main sponsors. As such, one wonders if Capcom will be following the tradition of revealing a new "Hobby-style" Rockman game at the show.

Coro Coro Comics also follows a similar tradition in that they tease forthcoming WHF Rockman announcements prior to the actual event. They haven't done so yet, but perhaps we'll hear something from latest issue, which ships mid June just before the show. Again, all speculation.
Posted by Protodude at 12:33 PM