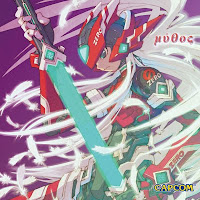 Inti Creates have pulled the wraps off of the cover artwork for the upcoming Remastered Tracks Rockman Zero soundtrack. Once again, the art is handled by Toru Nakayama, and I must say, this has quickly become one of my favorite pieces he's ever produced. You can check out a much better look at the art on Inti's homepage here.

In related Zero Collection news, the June issue of Nintendo Power is featuring a two-page preview for the game which details the addition of mod cards and the new easy mode scenario. According to the article, the mod cards are indeed the Japan-only Zero 3 e-Reader modification cards, which alter Zero's abilities and various graphics such as the appearance of the Resistance Base. It's unknown at this time if the game will include the Battle Network 4 link-up features and the various mini-games.

Exclusive to Zero Collection is a new easy mode. Here, the player is given more health, four Sub-Tanks and instant access to every Cyber Elf. Apparently, as a trade off for the easier difficulty, you're forced to play the games in order -- hence the much hyped "play the games in chronological order" feature. Of course, when playing in other difficulties, you're free to choose to play whichever game you want when you want.

Credit: The Mega Man Network
Posted by Protodude at 12:02 PM