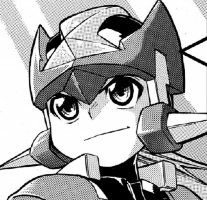 The July issue of Famitsu DS+Wii held a poll to determine which of their former comics will return with a new chapter in the upcoming anniversary issue (October). The Rockman ZX comic adaption by Shin Ogo, was one of the many choices.

Not much to say than that. Results of the poll will be revealed at a later date.

Source
Posted by Protodude at 1:22 AM