Today at the World Hobby Fair, Capcom officially announced "Rockman EXE Operate Shooting Star" for the Nintendo DS. The title is said to release in 2009. 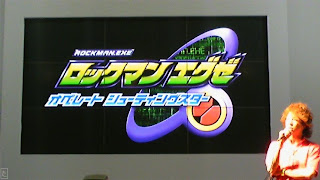 According to Dark Messiah, the game is some sort of cross over with the Shooting Star Rockman (Star Force) series:Additional details will come from the September issue of Coro Coro Comics, slated to hit newsstands in mid August.

UPDATE: After the unveiling, series producer, Takeshi Horninouchi took the stage and announced he has several ideas for individual Rockman projects leading up to the franchise's 25th anniversary.

UPDATE 2: Not sure if anyone else noticed this, but the promotional "shaking hands" artwork for Operate Shooting Star originated at last year's Rockman summer festival. Check it out here.
Posted by Protodude at 2:46 AM