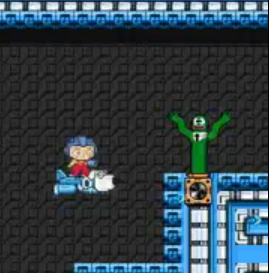 Mobile phone game, "Family Guy Uncensored", pits the dysfunctional Griffin family in a series of bizarre, pop culture inspired, mini games. One game in particular is a blatant homage to classic Mega Man, starring g Stewie Griffin adorned in MM attire and Brian Griffin as Rush. Awesome, right? (and yes, that is none other than "Wacky Waving Inflatable Arm Flailing Tube Man" playing the role of a common stage foe.)

Gameplay can be viewed here at the 0:29 and 0:40 marks. The title itself can be purchased at AT&T's homepage.

Thanks, Just
Posted by Protodude at 5:13 PM