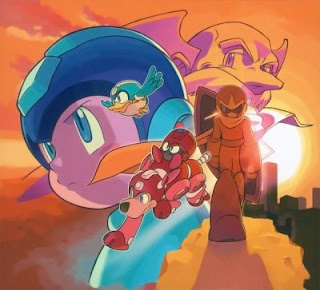 Before the leaked OFLC rating and Destructoid's time traveling cat, Rockman Corner has been teased with news of a Rockman 9 from "The Shadow," a self proclaimed "beta" tester at Capcom USA.

For about a month or so, The Shadow has subjected PRC to rumors of a Rockman 9, the most notable rumor concerned Rockman 9's presence on XBLA and PSN. Myself along with other readers swept his remarks under the rug. However, the fact that The Shadow's rumors have popped up before all others leads us to now assume he is indeed a reliable source.

Thus, I am honored to announce that The Shadow has agreed to spill some specifics about Rockman 9 exclusively through PRC. Without further adieu:

-Rockman 9 will feature a retro 8-bit art style, a homage to the earlier games.

-Two playable characters: Rockman and Blues (ProtoMan). Each has their own unique storylines.

- A popular belief is that RM9 will act as the 'link' to the events of the X Series. This is not so, The storyline DOES NOT lead into the X Series, rather it's a 'traditional' plot.

-Gameplay is reminiscent of Rockman 3-6.

-RM9 will be on all major home consoles: Wii, X360 and PS3. X360 and PS3 users will be able to purchase the game from their respective download services. It's unknown how the Wii version will work, whether it will be a downloaded game or not.
Posted by Protodude at 11:43 AM