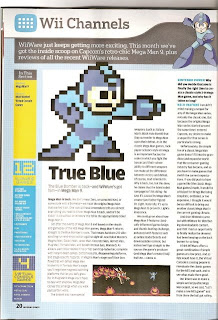 Yes, it seems RM9 is slated to hit WiiWare, in true 8-bit form.

I don't know what to say. I'm somewhat disappointed in the 8bit look, but this may turn out to be enjoyable! Judging by the interview, it appears Inafune plays a large role in the game's development, thus this will be awesome.

I managed to zoom in on the pics and got some extra info from the interview:

The story revolves around a conspiracy. Dr. Wily claims that the 8 Robot Masters are not his doing, and puts the blame on Dr. Right. Thus, Rockman tries to prove his innocence.

Capcom USA has just confirmed RM9's existence, along with a small tease!
“I will also say, NP only has part of the story. More to be learned later.” - Corporate Officer and Vice-president of Strategic Planning & Business Development Christian Svensson

Oookay, so the MMN has been killed due to traffic. Here's an alternate link to the pics with higher quality scans.

Capcom has ordered the pics to be taken down-for now.
Posted by Protodude at 1:56 PM