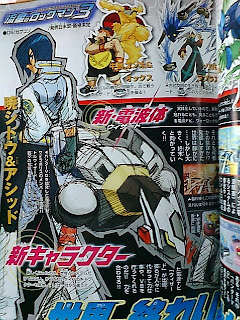 Courtesy of the MegaMan Network:

-The game will feature new EM beings called Wizards, which are in same way a carry over from the Battle Network era. They are Navi-like beings that can materialize and be touched and seen. Some Wizards are Battle Wizards and fight EM viruses, so it's implied they have broader applications.

-The new portable device Geo and everyone uses is the Hunter VG. They are capable of materializing Wizards for various work for people. It has a Wizard Slot that different adapters can be inserted into. The War Rock (Omega-Xis) and Ox (Taurus) adapters are mentioned.

-The new character featured in the first SF3 wallpaper is Shidou (his last name I can't translate at this time). He is an ace member of the Satellite Police who developed the Hunter VG. He is accompanied by a Wizard named Acid.

-Omega-Xis and Taurus will seemingly become Wizard-like beings thanks to the Hunter VG. Rogue from the previous game is also accompanied by a Wizard named Laplace.


Scans from the Coro Coro will be up in the very near future, hang tight.


UPDATE: And we have a scan! Scan depicts the partial cast's Wizards along with a "fresh" Ryuusei logo. More scans are still to come.