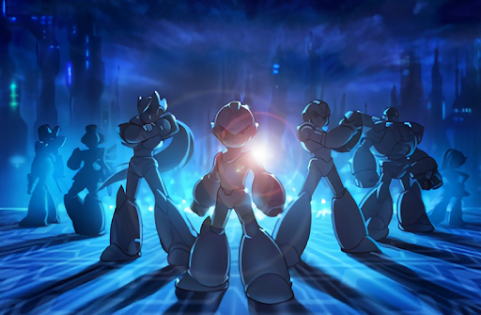 Move over, Rockman X DiVE. The ghost of a much older classic/X series crossover is back on the scene. A big-batch of official concept art from Capcom and NeoWiz's ill-fated Rockman Online has surfaced, bringing us our first look at several unannounced characters, stages, cutscenes and more!

The following images were anonymously posted by one of Rockman Online's primary concept artists. The images were "unlisted" up until recently. Although they aren't available in their original resolution, there's still a LOT to appreciate. 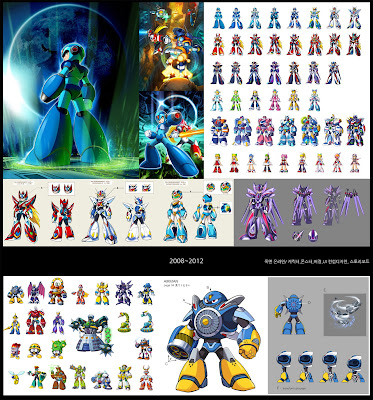 You've probably seen the images on the top left before. Two of X and Zero's armors and a few boss designs were publicly reveled ten years ago, too. But beyond that, there's a TON that we've never seen before. 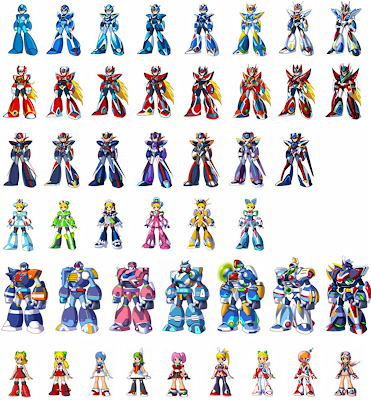 There's several unseen armors for X, Zero, Duo and Cinnamon. Three previously unannounced playable avatars -- Axl, Rockman and Roll -- each had their own line of armors, too!

The bottom portion covers different bosses and enemies. We've seen a few of them before... but look! There's Air Man, Dark Necrobat, Dark Man (?), Ballad, Wood Man, Vile... the list goes on! Needless to say, it's great to see Rockman Online's take on these legacy characters after so many years.

This image features a slew of unseen weapons, in-game menus and -- perhaps most interesting of all -- cutscenes. The caption under the big group shot is legible. It reads:

"There were heroes who tried to save the world against those who conspired against it; waging great wars long into the night.

As the sun rose, the heroes emerged stronger than before. Their light shines upon all."

Though vague, this is somewhat analogous to the game's general plot. Rockman Online's story reportedly took place several years after the X series. To thwart a sudden spike in Irregular activity, the United Continent Association (UCA) "revived" the deceased X, Zero and Duo, transfering their DNA Souls into special Copy Bodies. These were avatars that players were expected to inhabit as they did battle with revived, power-up forms of Irregulars and Robot Masters.

The events of the game were depicted in two impressive animated trailers. Beyond that, though, much of the plot remains lost to time. Bummer.

We're not done yet. Check this out...

The last image comes to us from another dev team member. Stage renders! We had the chance to see a few of these in action before, a whole decade ago. Remember?

The above artist started working on Rockman Online in 2007, almost three years before it was officially announced. They complete their work in 2009.

Aaaaand that's all for now! As the years go on and NDAs expire, we may yet have more lost Rockman Online history to consume. I hope.

I, personally, am looking out for the beta keys. These were special invites given to contest winners ten years ago to participate in Rockman Online's closed beta. Myself and a few members of The Mega Man Network were actually in close contact with a winner from South Korea. We lost contact shortly before the game was cancelled. We never did learn if the beta went on as planned.

Amunshen, my old friend, if you're still out there... little help, please?

Posted by Protodude at 8:07 PM