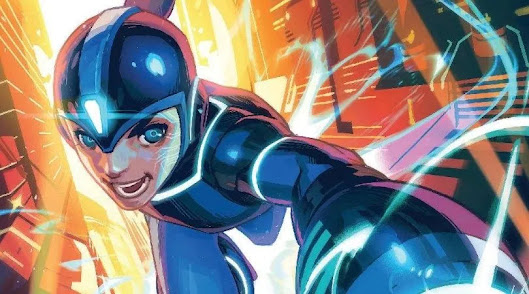 All six issues of Boom Studios' Mega Man: Fully Charged series are now available in one handy-dandy trade paperback. You can grab it from Amazon or wherever comics are sold for a cool $14.

For the uninitiated, the comic acted as a "spiritual second season". Taking place after the events of "The Gauntlet", the series focused on Mega Man (aka Aki Light) coming to terms with forgotten memories of The Hard Age. After Dr. Light is kidnapped by Dr. Wily (the *real* Dr. Wily, might I add), Mega Man sets off on a journey that tests his metal -- quite literally.

Even if you're not a fan of Fully Charged, I think you might enjoy the comic's strikingly dark, "grounded" take on the mythology. It's an interesting read, to say the least. No knowledge of the show is required. I mean, really, you can pretty much jump right in. It's fun to compare the two Fully Charged iterations, that's for sure, but you aren't missing any essential story beats.

Also, for those interested, we not only reviewed each issue but also had the opportunity to interview artist Stefano Simeone! Enjoy!