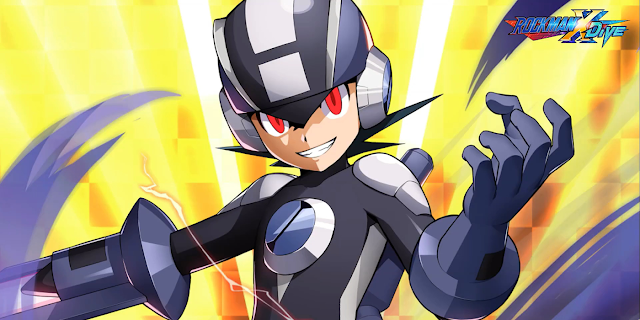 It's been a while since Rockman X DiVE got a character from the Battle Network Series. We'd have to go back to February when Bass GS was released. But now a new character from the Cyberworld arrives to the Deep Log... Dark MegaMan.EXE!

Dark MegaMan.EXE's first active skill is Dark Sword which causes damage to the targets in range but induces Confused status with Auto-aim disabled temporarily due to a bug.

His second active skill is Dark Thunder which releases a chasing ball of lightning that ignores terrain. It renders the target Immobile but you will lose HP.

One of his passive skills will allow him to gain enhanced damage state when using a skill. It can be stacked up to 15 times and can't be removed.

Dark MegaMan.EXE is described as a character with high attack power but at the cost of self-inflicted status ailments. It's an interesting trade-off.  He'll be available this Wednesday through July 14 when the 13th DiVE Festival starts!