The Year in Review and the Mega Man 2019 Roadmap 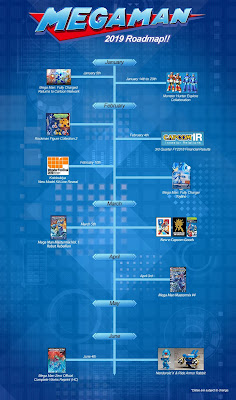 As the year comes to a close, there's no time like the present to pause and reflect. And you know, I think we can safely say that this year has been one of the best in recent memory. Not just for the Mega Man franchise but for all of us – the fans.


Where to start? Well, like always, there's been plenty of figures and toys. Kotobukiya re-released their line of model kits (more coming next year), Sentinel released the Rockman 30th Anniversary x Sentinel 10th Anniversary Collaboration figure, and before the year ends, we've got a new Roll Caskett 4Inch-Nel on the way. We also got the Roll Nendoroid, the Ride Armors, and a second wave of mini figures from Bandai's 66 Action toyline. Not to mention plenty of stuff from Jakks Pacific and the new Rockman Nanoblocks, too.

When it comes to print material, UDON published the Mega Man Mastermix manga and announced the Mega Man X: Mega Mission one-shot. UDON also re-released the R25 in two hardcover volumes, one for the Classic series and one for the X series. We also got the Rockman 11 one-shot manga.

Soundtrack-wise, we had the Rockman X Anniversary Collection, the Rockman 11 OST, and the long-awaited Ryuusei no Rockman Sound Box hit the shelves in July. And out of nowhere, Capcom surprised us with a vinyl version of the Rockman 1 to 3 soundtracks in September.

Mega Man: Fully Charged premiered on Cartoon Network in the United States on August 5th, then disappeared. It's coming back with more episodes in early January. Love it or dislike it, we all can agree it's nothing but a miracle that a new animated show was made ten year after the Ryuusei no Rockman Tribe anime ended.

And finally, the games. Mega Man Legacy Collection 1+2 was released for the Nintendo Switch with the new rewind feature. Mega Man X Collection 1+2 was released for PS4, Xbox One, PC and Nintendo Switch. Japan received Pachislot Rockman Ability. And the icing on the cake, of course, was Mega Man 11. It's been eight years since the last fully-fledged Mega Man game and this one (for many of us) didn't disappoint.

All of the above is just the tip of the iceberg, though. The franchise generated even more headlines this year – I mean there's been a little over 300 news articles posted on this blog in this year alone. 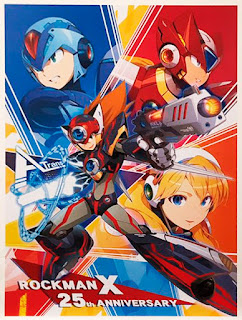 Well, there is a lot of excitement around the X series lately. First we had Mega Man Legacy Collection 1+2 moving the series in the forefront of gaming after years of dormancy. Then there was that open-to-interpretation line in the Rockman X Anniversary Collection soundtrack, "The story of X's fight is not yet over." And finally, the above new artwork by Mizuno that's appearing in a brand-new artbook and commemorative merchandise. Tantalizing stuff.

Realistically speaking, Mega Man X9 is not going to be released next year. Mega Man 11 debuted only a couple of months ago and Capcom are likely going to be spending some time analyzing its performance (in addition to X Anniversary Collection 1+2 sales). With Capcom's Q3 earning expected to be announced in early January, we should have a better idea of how Mega Man 11 performed in its early months on sale.

Whether the results are good or not-so-good, it will determine how much staff and budget should be allocated to any future projects, among other factors. Now, that's not to say X9 isn't in pre-production. Just bear in mind that, for now, Capcom are keeping their cards close to their chest.

So new game-wise what can we realistically expect? Perhaps 2019 will be a transitional year with little to no new games, but new collections? If so would we see a Battle Network Collection? A Legends Collection? Time will tell.

If you really want to know what is next down the line, take a look at the roadmap at the top of the article– that's all for now! Enjoy the Mega Man X Legacy Collection and Mega Man 11 in the meantime!
Posted by Reploid21XX at 10:08 PM