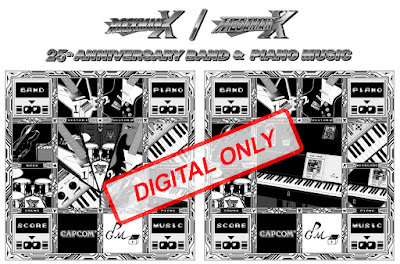 We reached out the publisher of the new Rockman X piano and band arranged albums to find out if it will be released on CD. According to them, they have no plans to release either album on CD at this time. They chose the "digital only" format in order to reach a wider, international audience.

GMSTORE Corp. seems to be a small label with not much work done before this particular Rockman X project. Releasing a physical CD worldwide not only would be a logistical challenge, but it presents a financial risk for them as well. It seems their goal is to offer equality for fans in both Japan and beyond, rather than doing a physical release just for Japan and a digital only version for the rest of the world (which has been pretty typical lately).


They are tackling an ambitious project here; literally creating two albums for each game in the X series (minus the Game Boy games). That's a total of 20 albums, 790 songs plus an additional ensemble album with 10 songs selected by fans.

The success of this project rests in our hands! Head over to the GM Store to listen some samples and decide by if it's something you'd be interested in.
Posted by Reploid21XX at 4:26 PM