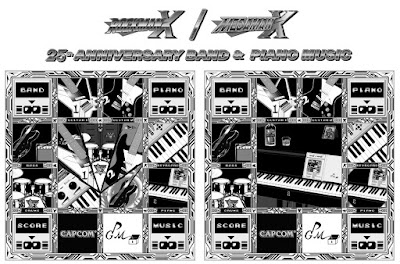 A week ago GM Store announced the digital release of new arranged albums based on the Rockman X soundtrack, arranged and played by a band and also by piano independently. And starting today, on the 25th anniversary of the X series, they're now available to purchase.


Both albums are available in MP3 and WAV format. There's also PDF scores too in case you are musician and want to play this new arranges by yourself. But they didn't stop there, they went the extra mile and provide independent music tracks for Guitar 1 & 2, Bass, Keyboard and Drums for the Band Album. Prices, music samples, and links to buy 'em are available here.

If you like what you hear, get a load of this: they will be also be rolling out albums for the rest of the X series games, too. Between 2019 and 2020, you can look forward to new arrangments from X2 to X8 and also Irregular Hunter X / Mega Man Maverick Hunter X and Rockman X Command Mission / Mega Man X Command Mission.

Furthermore, they are asking fans (after purchase) to vote for their favorite 10 songs from a list of 395 songs selected from all the Rockman X games. The voting phase will end on May 31st, 2019 and the results will be published on June of that year. The songs selected will end up on a new album called Rockman X / Mega Man X Series “Ensemble Ver.”, which likely is going to be an orchestrated album.

As of today these albums are only digital. Time will tell if they are released on physical media. Meanwhile I recommend you give them a listen – they're top notch!

Thanks to Hayden for helping with some of the details.
Posted by Reploid21XX at 4:14 AM