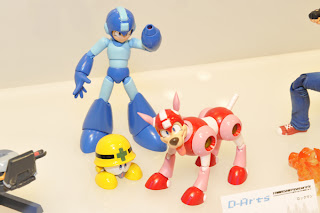 Just spoke with our friend Adam Newman at Bandai, and he brings good news: D-Arts Mega Man is definitely headed stateside. U.S market release is planned for January 2013, and pre-orders should start opening up around September 5th. That's next week!

Even better news: you know that Rush and Metall figure? Yeah, they're included in the package.

"The two accessory figures you mentioned are planned to be included in the set based on feedback received from fans at events and surveys conducted on Tamashii Nations USA Bluefin Facebook page," confirms Adam. Hey, and here I was worrying they were for "display only." Phew!

Lastly, Adam will be sending over better pictures of the figure soon. I'll toss them up as soon as I get them. In the meantime, keep those questions coming! If you've got something you want to know about the figure, drop a comment.
Posted by Protodude at 10:31 PM