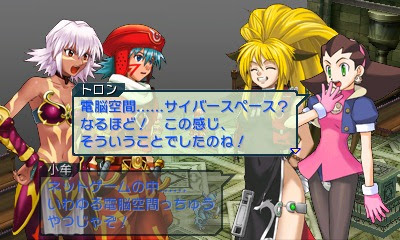 Hey, here's a tiny Project X Zone update for you. While it's not much, I thought the Tron Bonne fans out there might enjoy the latest screens and info.

If you recall, Project X Zone pits numerous characters from Namco Bandai, Capcom, and Sega games into battle. But how do they run into each other? According to Siliconera, Tron Bonne and Xiamou (of Namco X Capcom) are lost in cyberspace. In their travels, the pair end up in the fictional MMORPG The World. There, they meet .Hack leads Kite and BlackRose.

Are they going to fight each other? Sure looks like it. I mean, it wouldn't be much of a game without that part, right?

Project X Zone is due for release in Japan on October 11th. Still no word yet for any release in the west, but we can hope.

Source: Siliconera (thanks, Rock Volnutt!)
Posted by Protodude at 1:47 AM