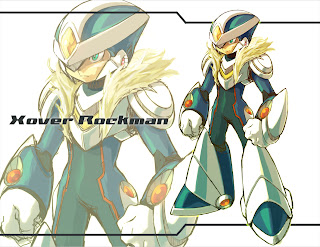 We've barely seen anything from Rockman Xover, the new social RPG for iOS devices, but there's already a nice piece of fan art online. This is Hoketsu's interpretation of the game's hero, "Xover Rockman." Capcom hasn't revealed the character's official name just yet, but you've got to admit "Xover Rockman" has a nice ring to it.

Enough about the name; what do you think of the character? Sure, the design is a bit different from what we're used to, but hasn't that always been the case?  There's bound to be a healthy amount of disagreement whenever a new Rockman is unveiled. It happens.

Check out more of Hoketsu's fantastic Rockman-inspired artworks at his Pixiv here.