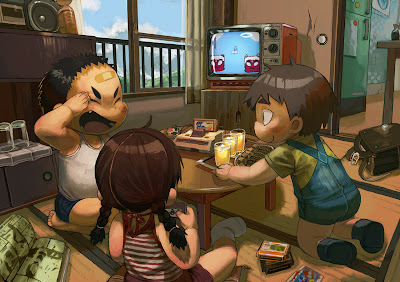 You know, watching someone else play Mega Man games may not be quite as fun as playing them yourself. I mean we had that one friend: the kid who invited you over to play games, but you end up becoming the audience instead. And yet sometimes watching a game can be just as rewarding, especially when it's for a good cause.

Beginning at 3pm CT next Friday, August 31st, the MX3 team are holding a 48-hour Mega Man marathon for Child's Play Charity, during which they will play through 19 games. Child's Play, for those who don't know, delivers video games and toys to children undergoing institutionalized medical treatment all over the world. Donations will be accepted during the stream and much like last year, the goal is to raise 2,000 dollars.

For more information, be sure to check out their Facebook page and Twitter. It's for a good and worthy cause, folks. Try to participate if you can!

Image via Mochizuki Gohei.
Posted by Protodude at 9:58 PM