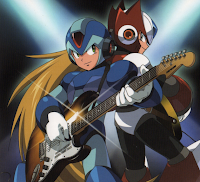 Ah, it's that time of the year again. OverClocked ReMix’s second annual Grand Maverick Remix Battle is officially gearing up for launch!

Just like last year, remixers from around the web will choose a Maverick from Mega Man X through Mega Man X8. From there, remixers will be pitted against each other and they have one week to compose a track using both their Maverick's themes.

The following week, a public vote will be held to determine who has the better mix. The winner will move up the brackets (two brackets competing on alternate weeks), and the process continues until there is only one theme left... the champion!

If you'd like to participate, you have two weeks sign up before things start cooking up. And if you're not a remixer by any means, the tournament is always looking for help in the art department. Banners, signatures, illustrations, and so on. The visual motif for this particular competition isn't set in stone, so don't get too invested in that just yet.

For full details, rules, voting, and more, check out the complete post in the OC ReMix forums here. Good luck out there!
Posted by Protodude at 5:48 PM