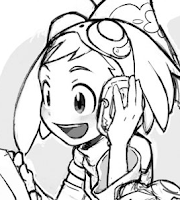 At long last, Get Me Off the Moon's proposed Mega Man Legends 3 fan-album is finally on the burner. Tonight, we've received word that the project is officially a go.

"About a month ago, we announced plans for a Mega Man Legends 3 Concept Album project to commemorate the one-year anniversary of the Mega Man Legends 3 revival movement, Get Me Off The Moon.  Well, I'm very pleased to announce to you all that this project is now officially underway over at the Devroom!

Basically, you guys will be tasked with the job of composing music that you think might have gone into Mega Man Legends 3, had it seen the light of day.  Don't get the wrong impression, though, we're not looking for any specific style of music, it can be anything!  For this project, we want to draw out everyone's creative spirit!"

So, what does a Legends 3 inspired piece sound like? Well, a little something like this. That comes courtesy of The Mega Man Network's Jesse "Mainfinger" Gregory. It's called "Klicke Lafonica." Fitting, isn't it?

If this is something of interest to you, give it a shot! It's just for fun and it's a great way collaborate with other Mega Man fans. You can see the discussion thread here, and submit your contribution here.

I, for one, can't wait to hear the final product. Good luck to you, and keep on supporting!