Bandai Has No Plans To Localize "Comic Version" Rockman X 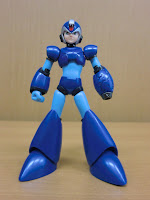 Bandai/Tamashii have made a tradition of localizing the D-Arts Rockman actions figures in the US market. Japan gets a figure first, then the US some months after. That was the pattern for the last year or so and "Comic Version" Rockman X is about to break it.

Bandai's Adam Newman sends word the company has no plans to distribute the figure abroad. In fact, its distribution will even be limited in Japan. "This is an event exclusive so no plans to sell anywhere outside the Tamashii Nations event," writes Adam. Now, this isn't necessarily bad news. Importing the figure from Japan is always an option. BUT, it's starting to sound like this will be one tough cookie to obtain after Tamashii's event.

The whole exclusivity status entitles Comic Version X to staggering secondhand market prices, poised to become a rarity. No doubt you'll have to fork over a pretty penny to nab this one!

Thanks for the heads up, Adam!
Posted by Protodude at 11:52 AM