How About Those Cut Man, Elec Man JUVIs? 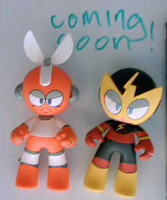 Toy manufacturer Jazwares has been experiencing a bit of a Mega Man resurgence over the past couple years. They've ambitiously pursued the return of the popular Retro Roto series, and more recently the urban vinyl "JUVI" series. In the case of the latter, we were supposed to get Cut Man and Elec Man JUVIs earlier this year, but nothing came to fruition.

Fearing the worst, Rockman Corner reader Marcus reached out to Jazwares for comment via e-mail, yielding the following response:


"We have no plans to release these two figures at this time. However, we are working on what's next for MegaMan. Stay tuned!"

Not a particularly good outlook for Elec Man and ol' scissor head, but the comment does affirm Jazware's intentions to produce new Mega Man products. For those not in the know, Jazwares previously confirmed the development of new figures back in November. Alas, he we are nearly a year later, and nothing's surfaced. That's not necessarily a bad thing -- better to take time to develop something of high quality rather than a shoddy piece of scrap! Still, I was hoping to see something new about now.

Anyway, I, personally, wouldn't completely rule out Cut Man and Elec Man. I'm sort of catching this vibe that they may be forthcoming, possibly to flesh out the new toyline... whenever that hits.

Thanks for the tip, Marcus
Posted by Protodude at 12:10 AM