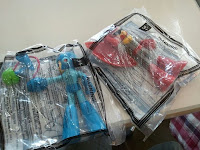 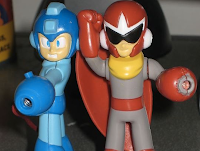 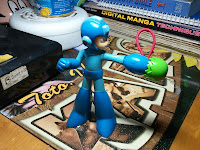 Check out more images here!
The Light brothers are the featured boy's toys of the month, available at participating restaurants while supplies last. Each figure has their own special feature: Mega Man shoots a spring-loaded Buster shot with an optional interchangeable arm part, and Proto Man... well, Proto Man has a removable shield.

Word has it the toys received a televised commercial as well. No footage of that at the moment, but hopefully someone will spot it and put it online. Jollibee switches out kids meal goods once a month, so you have until roughly mid-November to snag 'em.

Thanks, Ivan and Yelena!
Posted by Protodude at 3:26 PM