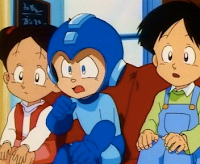 While not a confirmation in the slightest, I thought this was a notable tidbit of interest. Recently, there's been some discussion on the Ask Capcom forums about the likelihood of a theatrical Mega Man film. With some of Capcom's biggest IPs already making the jump to the silver screen, it's only natural to wonder what might become of the Blue Bomber.

"I'd think a TV format would work better myself. In any event, our licensing teams are in constant discussions with movie studios and tv production houses all over the world about such topics but nothing for me to report on that front."

Mega Man has long existed on the periphery of broadcast television in numerous iterations, relegated to weekday afternoons and Saturday morning airtime. From co-starring as a member of the N-Team in Captain N: The Game Master, to topping the ratings with the Mega Man NT Warrior, Mega Man has proven himself to be a viable TV character.  His return to airwaves would certainly be welcomed.

The characters and mythology, I feel, are better suited for a full length TV series as opposed to, say, a made-for-TV movie. Question is, if a new Mega Man show were produced, which iteration of the character(s) would you like to see make the jump? You can't go wrong with the classic series, but I wouldn't mind a Mega Man Legends serial, either. I could totally envision a 25 episode epic -- something along the lines of Nadia in terms of presentation and scale. Niiice.

A penny for your thoughts? Sound off in the comments below, or join the discussion directly at the Ask Capcom forums.
Posted by Protodude at 1:20 PM