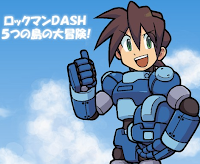 To help raise awareness for the Mega Man Legends series, the folks behind Get Me Off the Moon are on a mission to translate Rockman DASH: Great Adventure on the Five Islands in its entirety.

The project won't be a game translation in the traditional sense. Instead, Cap Kobun and members of Team Japan will be capturing footage of the game -- from start to finish, cutscenes and gameplay -- and subtitling it in English. All footage will be direct feed, meaning it is pulled straight from the game without the use of a camcorder. While audiences outside of Japan still won't get to play the game, the video anthology will ensure all fans an opportunity to enjoy it from a visual perspective. It'll be like watching a movie!

You can see some test direct-feed footage here. The dialog has not been transcribed just yet, but it's on the burner. Again, this is all happening thanks to the likes of Team Japan. As stated in a previous Roll's wrap-up, the project is a gift of sorts to the English-speaking fanbase. "For working hard to bring Mega Man Legends 3 back to the forefront of the fan community, I'd like to show you my appreciation from the bottom of my heart,"writes Team Japan. Well, isn't that a lovely gesture!

Future updates on the project will become available at Team Legends' official FaceBook page. I, for one, am looking forward to it!
Posted by Protodude at 11:16 PM