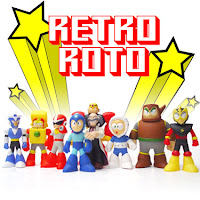 It's been a little something I've been sitting on for a while now, but they made it official: Jazwares is bringing the Mega Man line back in full swing starting in 2011, according to a recent press release:


"Jazwares, Inc., a leader in the consumer products marketplace, has been awarded the toy licenses for Capcom’s Street Fighter® and Mega Man® video game franchises. Under the terms of the agreement, Jazwares will be the master toy licensee for Mega Man. The Street Fighter license is a category-specific agreement that covers only the categories of Boys BS/PVC/Vinyl figures and accessories, 4-inch and under playsets and vehicles.
The Jazwares’ team of design experts have built a reputation for producing true-to-life toys that bring action-figure play to kids and collectors alike. In 2011 they will translate two of the most popular iconic video games into new collections for the fall.“We are extremely excited to put a new punch in the popular Street Fighter and Mega Man brands with all new action figure collections for the next generation of fans,” said Laura Zebersky, executive vice president sales, Jazwares."

Created by Capcom in 1987, Mega Man is one of the most iconic video game characters in the world and starred in more than 140 different games. Mega Man collectively sold over 28 million copies worldwide. Mega Man® 9 and Mega Man® 10 brought the reputation of the franchise back by recreating the classic game and graphics of the original Nintendo release.
Capcom and Jazwares team up in spring 2011 to combine classic entertainment with an all new line of kid and collector action figures, allowing kids and parents to continue the adventures of Mega Man at home. "

You will be hearing about these figures very, very soon but I can't say much more than that right now. Stay tuned! You're in for a surprise or two!

Credit: The Mega Man Network
Posted by Protodude at 9:13 PM