From Aero To Sephira 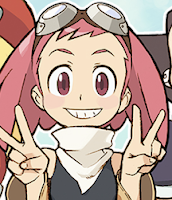 In case you missed it, Mega Man Legends 3's newest character Aero has seen another name change. A post over at the North American devroom updated with the following tidbit:

UPDATE FROM THE DEV TEAM: Apparently, Capcom Japan intended for Aero's name to be Sephira and have asked for us to update everyone. So there you have it! Allow me to re-introduce...Sephira!!
(via Capcom Unity)

Interestingly, the name change only applies to English side of things. Over at the Japanese devroom, she's still referred to as Aero -- so I think it's safe to assume this has to do with localization. The change shouldn't come as a major surprise; Capcom's made a practice of altering names and titles when it comes to bringing games outside of Japan for quite a while now.

For those of you keeping track, 'Sephira' marks the character's third name change. She was internally referred to as "Lilly" for a short while, then Aero (final name in Japan) and now Sephira for the rest of the world. Don't know about you but I like it; has a nice ring to it.