It's pretty common for developers and programmers to sneak in little hidden messages and graphics inside games -- some accessible, others not. The Mega Man Legends series is no exception, as all three titles in the series play host to handful of fun hidden graphics, buried within their respective texture and tile data.

While nowhere near as juicy as some of the stuff found within games like Erika to Satoru no Yume Bouken, the concealed goods of the Legends series are pretty neat in their own right, with content ranging from gag-faces (such as this one here) to hidden Mobile Suit Gundam references.

I've collected all known graphics after the break, complete with complementary info. Hit the read more, and check it out!

The far left bares a resemblance to Kinnikuman characters, Kenshiro (Fist of the North Star) the middle, and pig face is a nod to the character Odate Buta from Yatterman. Guess the tile artist was a fan? 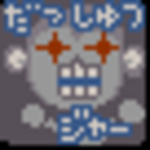 A rather creep looking Data appears among some scrapped graphics in Mega Man Legends 1. The text reads "ESCAPE."

Legends 1's texture data also contains images of Star Gladiator character. On the left, we have a yawning Hayato Kanzaki, and on the right, June Lin Milliam and Franco Gerelt. The latter appears throughout the graphic data of the Down Town area; no idea what they're saying, however. 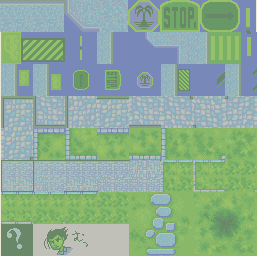 MML1's Uptown's textures contains a ponder character saying "Hm". No one knows for sure just who this is, however there's been some speculation it's a self portrait of Capcom staff member Hidesato Sueyoshi, the game's texture designer. Under the nickname "Sato", he occasionally snuck in his signature in several graphic files such as Glyde's mecha in The Misadventures of Tron Bonne.

Speaking of giant robots, the Cannam Reaverbot from Legends 1 contains a hidden image of Evangelion Unit-00 of Neon Genesis Evangelion fame.  Unit-00, incidentally, shares the Reaverbots' most prominent feature: the mono-red eye. Some could even argue various plot elements of the Legends games hearken back to the themes of Evangelion. Pictured right, a silhouette of a woman is also embedded within Cannam's textures. It's a bit hard to make out, but to me, it looks like she's holding a cat(?)

Tron's textures in Legends 1 contain a miniature Tron face that says "scraps", a reference to the extra, useless space in her tile data. Not necessarily hidden, but the bottom of Tron's shoe looks like it contains a face, or a low quality render of the Bonne family skull emblem. 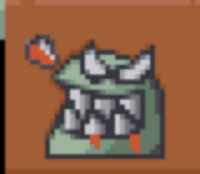 A bloody thirsty monster can be found within the graphics of the Servbot truck in The Misadventures of Tron Bonne. Unlike the rest of the hidden images, you can actually see this one in the game via some clever camera tricks. See how to pull it off here. 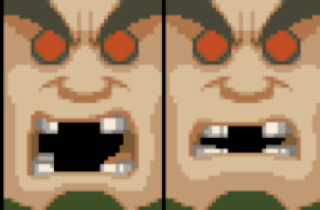 ...and a toothless Teisel in Legends 1.

Data has a bunch of unused faces in L1 and L2 but this one, a supposed perverted expression, is just hilarious. No idea where this would have come into play.


And that's that... for now. As we continue to scrounge through the games, images like these are constantly being discovered. Games beyond the Legends series do hold their fair share of hidden graphics, too, but aren't as fun as these, honestly. You can really tell the MML team had a blast here, and I can only hope we'll see more of this stuff in the innards of Legends 3.