Kotobukiya Models To Be Sold Outside of Japan 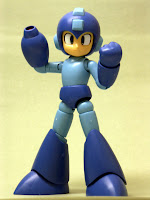 Good news, everyone! Kotobukiya's U.S subsidiary have announced that their popular 1/10 scale Rockman models will finally be sold outside of Japan:

"Mega Man, also known as Rockman in Japan, is a cybernetic video game character, is the title character of what has been referred to as the original Mega Man series developed by Capcom since 1987.  Since then, he has become one of the company’s primary original characters and continues to be one of the video game industry’s most recognizable icons.

Now that Kotobukiya x Capcom collaboration has come to its fruition to release “Mega Man super pose-able model kits” outside of Asia, make sure to keep checking Kotus.com and our FACEBOOK for updates!

KotoUSA have yet to divulge details on release dates, retailers or pricing but I imagine those announcements aren't too far off. Regardless, this is excellent news. More updates as they come in!