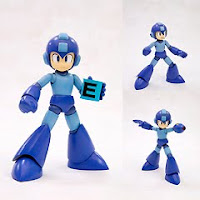 Originally slated to releasing "sometime in September", it appears Kotobukiya's 1/10 scale Rockman model has been given a more specific release date, if Amazon Japan is to be believed.  According to the site, the figure will ship out on September 25th, 2010 -- a date which was recently confirmed by the model's manufacturer through a pre-order confirmation message sent to PRC reader RollChan yesterday.

While Capcom themselves have yet to announce an official release, the Sept. 25 release is likely within the ballpark. We'll be keeping you posted!

Looking to purchase the model? A list of import shops selling the figure can be found here. Thanks for the tip, RollChan!
Posted by Protodude at 1:48 PM