Now here's a rather neat blast from the past: a rare look at the canceled wave two line of Jazware's Retro Roto figures, coming from the archives of Figures.com and Toy News International. 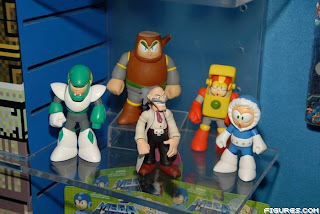 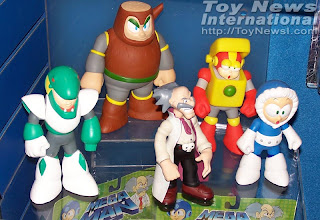 As the story goes, wave two would have released back in 2006 shortly after wave one. The line was planned to consist of Heat Man, Wood Man, Ice Man, Snake Man and Dr. Wily figures, as seen above. Unfortunately, the market for the toys waned and many Jazewares Mega Man products were consequently canceled, wave two included. Till this day these figures have never resurfaced, not even in the form of prototypes.

Hope for the release of wave two is bright, however.  The company recently expressed an interest in perusing the production of the figures according to an interview with Jazeware's Scott Levine in addition to new 3.5'' figures. Perhaps the re-release of wave one is a precursor of what's to come? We can hope. Actually, scratch that, you can do more than hope -- you can tell Jazware's you want them via Twitter of FaceBook. You never know, fan support could go a long way.
Posted by Protodude at 12:46 AM