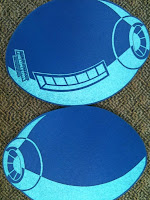 Heading out to Comic Con later this week? Don't forget to stop by Capcom's booth for all sorts of free Mega Man swag. In addition to those cute Servbot Bobble Buds, here's some other Mega Man goods to expect at the show:

You can also score some merchandise on Saturday, July 24 at 1PM during a Mega Man cosplay contest. The first 50 cosplayers to show up will get both the trucker hat and foam busters, while the winner of the contest (as judged by Keiji Inafune and MMU producer Ito) will receive a sketch signed by Inafune!

Needless to say, I'm very jealous of everyone on the West coast! (Better bring me something back...) Regardless, please have fun! You can check out the complete list of other Capcom goods at the show and booth map here. It all kicks of July 22!
Posted by Protodude at 6:02 PM