November 16 is here and sure enough, the Japanese Legends 3 devroom is open! The English devroom isn't open just yet, but we've got some nice details from the Japanese side of things in the meantime.

First and foremost, the devroom has a new look at Legends 3's newest character, Aero (EDIT: It's Sephira, now). Komaki's winning design has not only been renamed but has also seen a few alterations in design: 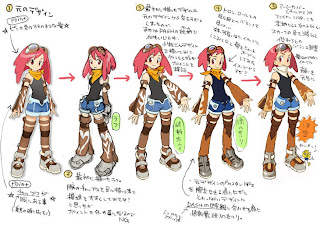 Pictured right is her finalized look. Not to shabby, no? In fact, she matches up quite nicely with the other leading ladies of Legends 3, Roll and Tron... 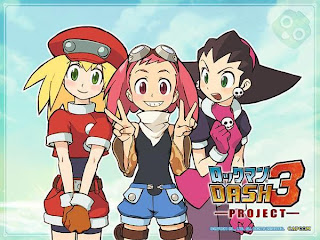 The above image is a wallpaper Japanese fans get upon opting in for the devroom. I imagine the U.S side will have something similar.

Lastly, for now, the devroom is featuring a nice Legends 3 completion meter towards the top right of the page. As of this writing, the "rocket to go save Rockman" is only at 1% completion. Long ways to go, but we'll get there!

UPDATE: The U.S Devroom is slowly coming to fruition.

The page is sporting a few new features and English translations of today's Japanese devroom updates. No sign of registration just yet but in the meantime, enjoy these officially translated Aero design assets:

① The main design points of the original design were her “pink feather-like hair” and the “chaps on her arms”.
② The first rough sketch. What would happen if I took the chaps on her arms and brought them to her legs with a slightly bigger pattern? This was no good because it went against the original two design points.
③ Since the last try was unsuccessful, I decided to draw Komaki-san’s design in the traditional Legends style and then analyze any mistakes.
④ Trying to find a balance between Tron and Roll, I went for a younger, more peepy look, and gave her hair a short bob. Was this too much?
⑤ I took the flame pattern on her chaps and changed it to a more feminine flower pattern. I toned down the color in her scarf and made other various adjustments to add some balance. I put her hair back to its original style and gave her face a little bit more blush.

More translated material at the devroom!
Posted by Protodude at 7:40 AM