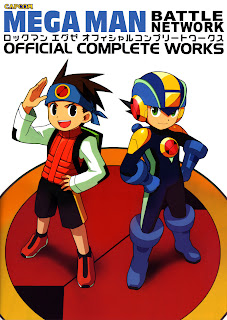 Couple of announcements coming from our good friend Matt Moylan at UDON Entertainment:

First off, Matt sends confirmation that the much delayed Mega Man ZX volume one manga will be in stores next Wednesday, June 2. Online retailers should follow suit shortly after, but comic book shops are guaranteed to have it on the 2nd.

Second, UDON has officially announced Mega Man Battle Network: Official Complete Works. The art book, a compilation of official and conceptual art from the Battle Network series, is slate to release in November 2010. Press release below:

As a bonus, Matt has passed along the tentative book cover.

Many thanks to Matt for keeping us in the loop and UDON for bringing us more Mega Man goodness.
Posted by Protodude at 3:25 PM