Your eyes are not deceiving you: RiCO is going to be a playable "Hunter Program" this week!
RiCO's first active skill is Data Recreation, which allows her to deploy an information window to pull a random skill from either Ultimate Armor X (Plasma Charge Shot), Awakened Zero (Genmu Zero) or Iris (Peaceful Wish).
Her second active skill is Data Analysis, which deploys a force-field that inflicts damage and absorbs energy from an enemy. What's more, one of her passive skills will "randomly remove a buff when hitting a target with your weapon attack"
RiCO will be available from the DiVE Festival gacha starting this Thursday until April 1st. She is an S rank character. 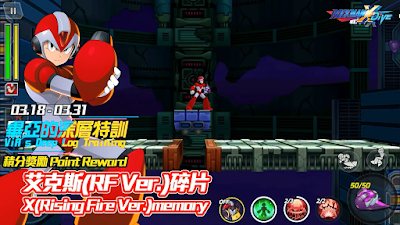 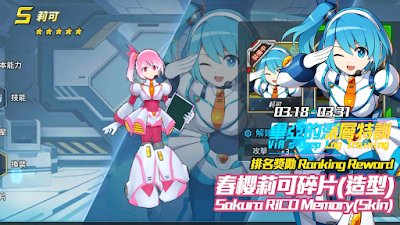 If RiCO wasn't exciting enough or you don't have the EM necessary to attempt getting her, well, fear not. Know that you will not leave the one-year anniversary festivities empty handed!
The development team is giving players the new A rank character, X -Rising Fire-,  for free. The only thing you have to do is participate in the ViA's Deep Log Training event and gets the point necessary to claim him.
You can see X -Rising Fire- in motion here and the event's boss fight against ViA (which appears to be using Zero's best moves) here.
Finally, RiCO will receive a skin that players can get by competing against each other in the event online ranking.
Is this fitting for the game's one-year anniversary? Let us know in the comments!
Posted by Reploid21XX at 8:13 PM