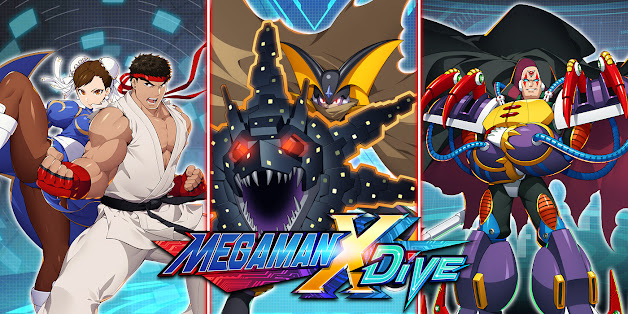 The Global version of Mega Man X DiVE celebrates a new DiVE Festival in the NA and EU servers next week. What's more, the Core Chip Recycling Campaign event is back and the LATAM server finally gets the Street Fighter Collaboration!
Find all the details after the break!

Next week the NA server sees the arrival of a new version of Bass.EXE: Bass.EXE GS. You might remember him from Mega Man Battle Network 3 when he fused with the multi-bug organism Gospel.
Bass.EXE GS' active skills are Gospel Cannon, which charges forward while shooting flames and Vanishing World -- a powerful beam that deals damage to all targets in range and deals one-time damage to all targets on-screen.
The banner comes packed with a single free 10-pull.

The EU server will receive Sigma (X4 2nd Form). He is packed with the active skill Scythe Throw, which launches Sigma's scythe to damage all targets in its path, returning back to him. This move can go through landscapes and barriers too.
And his second active skill is Laser Eye, a huge beam that will damage the targets in range and will spread out to cause more damage.
The banner comes with a single free 10-pull too.
What's more? Both servers, NA and EU are getting a rerun of the Core Chip Recycling Campaign event next week! 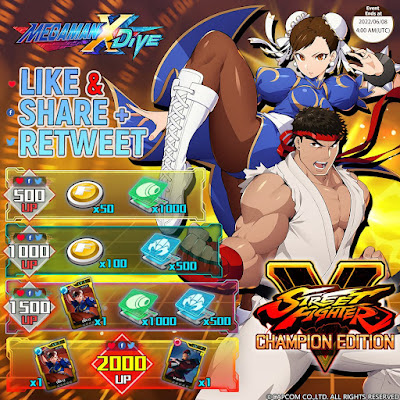 When it comes to the LATAM server, next Wednesday they'll finally experience the Street Fighter V event. You know the drill. the gacha banner with Ryu and Chun-Li will be available during the first week and Akuma will join during the second week in a separate banner.
The Ryu and Chun-Li gacha banner comes with a single free 10-pull.
Furthermoree, a social media campaign started today through June 8th. Players can get valuable cards like Chun-Li and M.Bison, character and weapon patches and fight coins to spend in the event store.
Head to the developer's Twitter and Facebook accounts to help the community reach the goals.
Posted by Reploid21XX at 8:47 AM