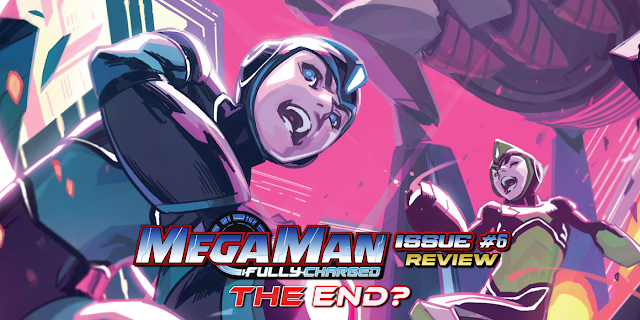 Finally, after waiting more than a month, the last issue of the Mega Man: Fully Charged comic is here. The final battle between Namagem and Mega Man, Wily's master plan and the never ending family feud await you after the break in our recap and review!

This review contains SPOILERS from beginning to end. Proceed at your own discretion. 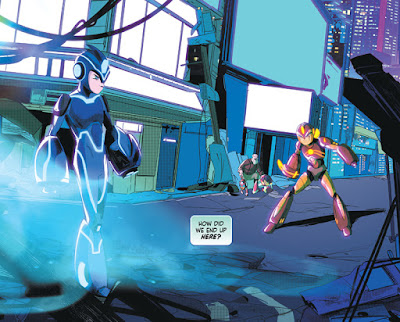 "How did we end up here? For the second time this year, Silicon City almost fell. Some of us took a stand. On both sides.

Mega Mini warns Mega Man that the "Fully Charged mode" won't last long -- the quicker Mega Man dispatches Namagem, the better. The fight begins and Namagem is no match for Silicon City's hero. Namagem tries to play mind games with Mega Man, reminding our hero that he still has the killer instinct he showed during the Hard Age and both are pretty much the same. 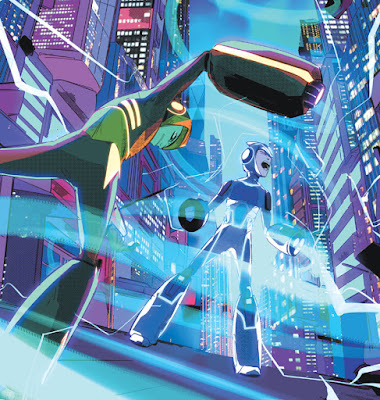 All of a sudden, Mega Man's systems start going out of control. Mega Mini tells Mega Man, "If you don't power down yer gonna go supernova.". Another memory bleed occurs and Mega Man sees flashes of the Hard Age again. This time, the memory depicts him and Namagem tearing down an army of robots. They were the same... a long time ago.

With the help of Mega Mini and the memories of the happy times he shared with Dr. Light and Namagem back in the Hard Age, Mega Man manages to power down, reverting back to his default form.

While Mega Man recovers, Dr. Light and Suna try to convince Namagem to redeem himself and return to his family. Suddenly, a flying object appears onthe scene -- its Wily onboard a pod! 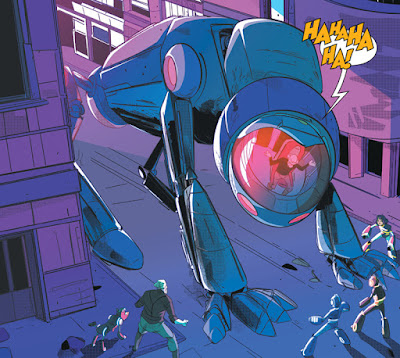 With the brothers ready to fight Wily, a big dog-like machine materializes and attaches itself to Wily's pod. Wily manages to capture Dr. Light with one of the machine's hands and tells him how peace has turned him into an hypocrite.

Showing that he actually cares about his family, Namagem then punches Wily's machine, freeing Dr. Light. Together, Mega Man, Namagem and Suna are ready to fight Wily to protect their father.

Mega Man tells Suna that they could use her drone, but Suna says that it was cut in half by Skull Man. However, she has another plan. Suna whistles and Rush appears on the scene to drop her an energy saber.

She charges at Wily's machine and manages to crack the pod. The machine propels itself into the air to counter Suna... but the brothers manage to save her. 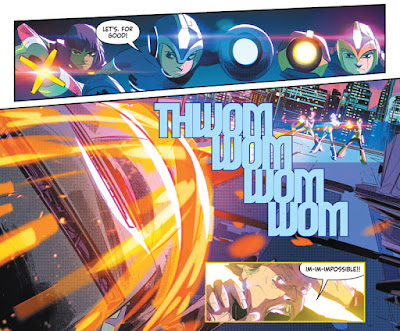 Now it's time to end the fight for good. Suna, Mega Man and Namagem join forces to destroy Wily's machine with a powerful energy blast -- a combination of Suna's saber, and Mega Man and Namagem's busters. With the machine badly damaged, Wily tries to escape in his pod but the brothers manage to make crash the ship into a dam.

Dr. Light reunites with them to witness Wily asking for mercy. Namagem denies his plea but Mega Man is willing to give him a second chance... if he uses his mind for good. Wily replies, "what a waste that would be".

Namagem is done with him and blasts Wily's pod, which makes it fall downstream.

Wily emerges from the water stream to escape, leaving a warning: "Mega Man, you think you're the ultimate weapon. But to me, you're just a prototype.".

Mega Man thanks Namagem for helping dealing with Wily. However, Namagem recriminates that he let Wily get away. Namagem flees the scenes declaring that no matter how hard he tries, they will never be brothers. Mega Man, however, suggests that Namagem's actions say otherwise. 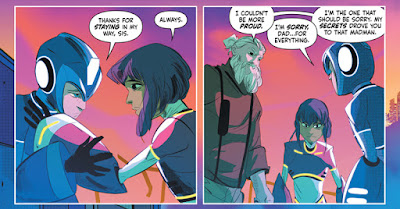 Suna, Mega Man and Dr. Light share a bonding moment. Dr. Light gives an ominous warning: "With the data Wily has stolen, it's only a matter of time before he strikes again". Mega Man replies, "and when he does, we'll ready.".

For issue #6, A.J.Marchisello and Marcus Rinehart team-up again as writers. The rest of the creative team remains the same as usual: Stefano Simeone at the pencils, Igor Monti on coloring duties and Ed Dukeshire on lettering.

Don't get me wrong; I enjoyed it and, in fact, it's a solid ending to the mini series. To a certain degree, this issue mirrors the simplicity of how some games in the Classic Series end. That in itself gives this final issue a certain charm.

In terms of the comic's technical side, the coloring is as always impeccable. Simeone's art was on point with some beautiful drawings, like the opening scene with Mega Man and Namagem on the streets of Silicon City. The full page artwork when Wily appears in his pod and the moment when Mega Man in Fully Charged mode goes out of control are moments that really shine, to name a few.

After six issues, I can definitely say that Stefano Simeone won me over, but it's easy to understand why some fans aren't too keen on his unique style. At the end of they day, though, one of the goals of this mini series was to create something different. I think the goal has been accomplished.

While the ending wasn't particularly exciting, I enjoyed the comic book and I hope it gets a sequel.  Let us know what you think of this last issue and the mini series as a whole in the comments!