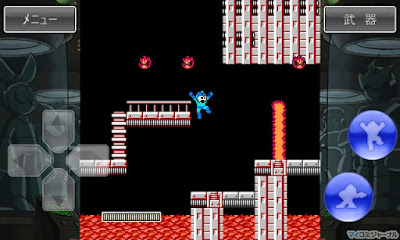 Today we're dropping a rare and relatively obscure mobile port of Mega Man 1 that -- if you have the right hardware -- can be played in stereoscopic 3D!

"Mega Man 3D" came pre-installed on a small handful of 3D-supported Sharp phones in late 2010. It's essentially a direct port of Mega Man 1 with the ability to play the entire game in 3D. To give a better sense of what it looked like, load up one of those "Nintendo 3D Classics" on the Nintendo 3DS. That's pretty much what we have here.

We have two versions of the game up to download:

Both can be downloaded here. To play the games proper, you'll need install the included .odex and .jar directly to your Android phone's system/framework folder.

Now, if you choose to play the original version on a phone, you'll need a phone that support's Sharp 3D API running on Android 2.2 or 2.3. Anything older than that won't work. BlueStacks doesn't agree with either version of the game, too. For now, I mean.

If you'd rather not mess around with all this downloading stuff, you can try your hand at finding a Sharp AQUOS 006sh. That was the "flagship" 3D phone that comes with the game pre-installed.

While it may be nothing more than a gimmicky port of Mega Man 1, it is a part of the franchise's history... and it's no longer lost!

Many thanks to kraze for safekeeping this!

Posted by Protodude at 2:03 PM