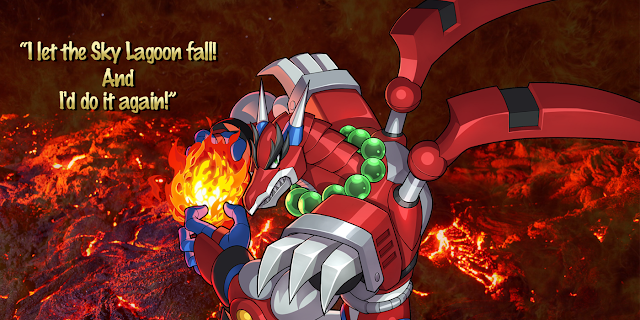 There's a lot of activity happening in Rockman X DiVE this week! We have a fan favorite Maverick becoming playable, the second installment of XDiVE Maximum Race and the beginning of the Spring Festival event, among other things. Check out all the details after the break!

Shoot flame rounds that inflict damage equal to 200% of your attack.

Perform a powerful uppercut while engulfed in flame to inflict damage equal to 300% of attack. You are invulnerable during the skill.

Indomitable Spirit: When below 30% HP, reduce damage taken by 25%.

Flame of Battle: Cause burning status when the skill hits a target, dealing damage equal to 10% of attack every 0.5 second.

Explosive Martial Artist: When you hit a target in continuous damage status, increase the damage you deal by 20%.

The speed race event XDiVE Maximum Race is now live through January 26 at 22:00 (UTC+8). This event is pretty much the same as the race mode in the challenge tab, but it incorporates the online ranking and points system from the Boss Rush Mode.

When it comes to the "point rewards", you can get 15 memories of the Nightmare sword, 130 EM and the usual rewards like Zenny or skill points. What's more, you can get card #74, Staring Dash that will increase your speed by 15% when entering a stage.

As for the online ranking, it's all about finishing the stage quicker than other players  to get some character/weapon patches and gift boxes. 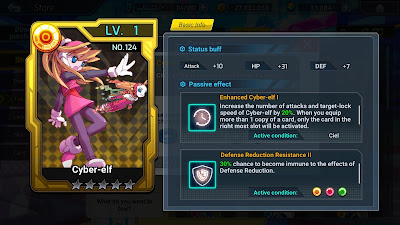 This update brings new cards to the game: Z Saber (Z), Zero Knuckle, Cyber-elf and Ciel System. You can purchased them with arena and co-op tokens in the store. 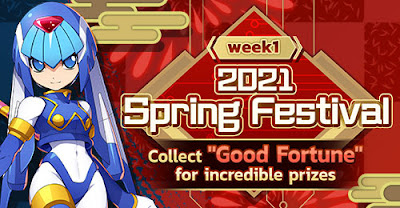 Similar to the Mid-Summer Night Party or the Operation X'mas event, the Spring Festival event is a multi-week event that will last until February 24th. The current events are as follows:
1. Spring Chest of Good Fortune (Leviathan)
From today until January 27 at 15:59 at (UTC+8) you can purchase one Spring Chest of Good Fortune (Leviathan) using 30 lucky coupons and another extra chest using two Golden Lucky Coupons. The last ones can only be obtained in the store for 1000 EM (no paid) each, so in total you need to spend 2K EM to open that extra chest.
When you open the chest, you have 10% chance to get one of the following rewards:
2. Good Luck Every day
For each day you login into the game and until February 24th, you will get one Lucky Coupon. There are 36 coupons in total.

4. Spring of Good Fortune I
On top of the Lucky Coupons you get by logging into the game every day, additional coupons can be acquired by completing the following missions:
So basically, you have two choices: use your weekly coupons to buy a chest or use them in the Spring banner. In a week, you can get 38 coupons. The banner is not going away but the chest will change every week. It's best to think carefully before using your coupons.
Alternatively, you can also use one Lucky Coupon to buy x5000 Proficient Memory Cards (limited to 5) and x25 Skill points (limited to 5).
And that's all for this week! If you want to check the items added to the store, you can do so here. Let us know how you're going to manage your Lucky Coupons or if you had any luck in the Magma Dragoon banner!
Posted by Reploid21XX at 5:42 PM