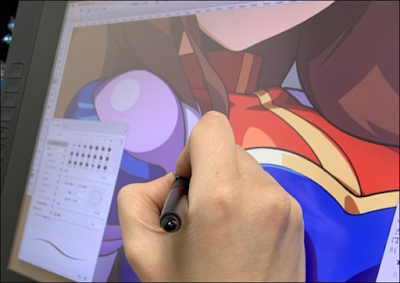 The Rockman X DiVE development team is more active than ever on social media as we further head into the game's launch window of Q1 2020. Catch up with the last days of reveals after the break!


Continuing with X's business trip, today we have a look at Keisuke Mizuno working on the 2D art of Iris for Rockman X DiVE. Nothing has been officially announced yet when it comes to the ill-fated fan favorite female Reploid. However, you it's a safe bet that Mizuno isn't drawing her just to be shown in the title screen of the game.

A couple of days ago, the Rockman X DiVE team apologized via Facebook because they had to cancel an event they planned for the Taipei Game Show (February 6th to 9th) due to the spread of the Wuhan Coronavirus.

As an apology to Taiwanese fans that were looking forward to experience the game at the show, they will be doing small FB activities to give away some goodies shown (in the image above). You can imagine, as a Taiwanese developer, this was a big deal for them. We can only speculate, but perhaps this was the place to announce the release date or at least introduce a new trailer? We will find out soon!

In this Facebook entry, they are low-key announcing a collaboration with "KOIKE-YA", a Japanese snack food manufacturer which also sells products in other Asian countries. They are asking fans to keep their receipts after purchasing these snacks for a future event. Apparently, you get a serial code printed on your receipt, which can then be entered on a special website to receive some unknown benefits. Perhaps the end result of this promotion is to get codes to redeem in the game? We will have to wait to find out. There will also be an in-game event related to KOIKE-YA and some of their mascots at some point in the future, too.

In the first video above, we can see Chill Penguin in action for the first time. In the closed beta trial, he was the 8th challenge mode boss. In the final game, he will be the boss of the 4th stage.

In the second video, we have our first "official" look at Massimo from Rockman X Command Mission. This isn't exactly new if you have been following the datamines.

And finally, here's a video of Vile fighting against Vile in the Goliath Ride Armor from Mega Man X3 in Storm Eagle's stage. The interesting thing about this is that dataminers found a different version of that artwork following the end of the closed beta:

Looks like they initially planned to introduce Vile MK-II with the Goliath Ride Armor (which would make a whole lot more sense) but it was scrapped at least for the time being. Maybe he will resurface in the future as a standalone character?
Posted by Reploid21XX at 10:40 AM