Different people have different reasons to buy Mega Man Zero/ZX Legacy Collection. Some will buy the collection to experience the games for the first time. Others, perhaps, want to re-play them again oncurrent generation of hardware. In my case, however, I'm neither of those. Of course I will enjoy playing the games on the big screen or take them with me on my Nintendo Switch. But my main interest lies somewhere else: the gallery mode.


The title of the article speaks for itself. The gallery in this collection didn't meet my expectations and, what's worse, didn't live up to the expectations created by Capcom itself through Mega Man Series producer Kazuhiro Tsuchiya. Let's review what he told Siliconera:

There aren’t any published art books for the Mega Man ZX series, so we think that the Mega Man Zero/ZX Legacy Collection’s gallery is pretty special."


I was hoping - and lead to believe - that the gallery in this collection will be "pretty special". Realistically speaking, I didn't expect much from the Zero Series as Inti Creates and Capcom did a great job with the release of the Mega Man Zero Official Complete Works artbook in 2006. On the other hand, an artbook for the ZX Series was never published. This collection was our best chance to obtain unseen artwork and concept art. And sadly, it has been a disappointment beyond belief.

Let's take a look at what the gallery mode in Mega Man Zero/ZX Legacy Collection has to offer, game by game.

The first game in the Zero Series has 147 pieces of artwork in the gallery and none of which are new. Regardless of that, it is a good selection of art that includes main art, character art, tons of art for the Cyber-elves, normal enemy type art and some concept art taken directly from the Mega Man Zero Official Complete Works.


The Mega Man Zero 3 gallery has, by far, the most artwork in the entire collection with 204 pieces. Only two of them are new: # 135, a concept art of Omega and #155, concept art for Copy X's throne chair and a sketch of one of the cutscenes from the game with Dr. Weil and Copy X sitting in his throne.

Capcom added most of the unused designs published in the Official Complete Works to the gallery. Oddly enough, however, they chose to literally copy and paste them from the Japanese version of the book which means you will see a lot of untranslated Japanese text next to the art. Perhaps it was too much work to get this from the English version of the artbook for western audiences? Your guess is as good as mine.

Finally, the last game in the Zero Series has 54 pieces of artwork of which  #46 is newish. It's concept art of Craft that can be found in the Official Complete Works, but here in the collection's gallery, there is a version with other portions of his armor colored white. 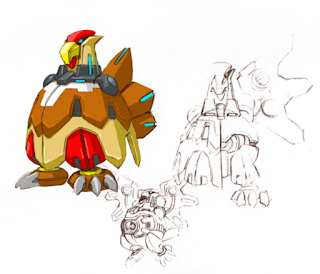 And there is an unseen piece of concept art/sketches of Popla Cocapetri as well.

91 pieces of artwork can be found in the gallery for Mega Man ZX, three of which are totally new and another three can be considered newish.

For the very first time, we can see a full body/full color version of Serpent's ultimate form. This specific piece of art was only available in the Rockman ZX Official Complete Guide, but it was covered in shadows. Some years later, it was used as a card in Rockman Xover in full color but not full body.

There is a set of four concept pieces for Prometheus and Pandora featuring their original, unused designs. Two of those pieces are new concept art of their signature moves and other poses. The other two pieces are partially new. They depict their unused body designs and some facial expressions. Portions of the body designs can be found in the Rockman ZX Soundsketch Gigamix music CD from 2008.


Lastly, there is character size chart with the heroes of the game and some members of the Guardians that is also new.

For Mega Man ZX Advent, we have 65 pieces of artwork and only two are newish. Artwork for Rospark the Floroid features some tiny bits of concept art that is new as far as my knowledge goes. The other half we have seen before. 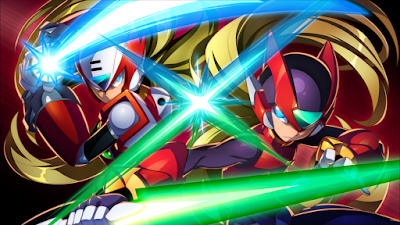 With a total of 18 pieces, this is where they put the rest of the artwork that doesn't exactly fit into the other galleries.

It includes pieces like the update version of the cover art for the collection and new artwork drawn by Keisuke Mizuno with Zero from the X Series and the Zero series (shown above). There's also a selection of artwork created exclusively for the Rockman Zero 3 e-cards released in Japan, Mega Man Battle Network Battle Chip artwork of Zero (one of which is newish) and some random pieces that are not new.


Notoriously missing from the gallery are many of the new pieces drawn by Toru Nakayama for some Japanese retailer preorder bonuses and the art used for the "Villains" Acrylic Art that can be bought at e-Capcom. We can argue that they didn't put this art in the gallery because they want Japanese fans to spend their money to get a hold of these new pieces. If that's the case, fair enough.

Still, it would have been nice to have all that art in the gallery for completionist reasons. At the end of they day, most people in the West will never get their hands on these items or even know they exist.


Furthermore, we know that there is a lot more than meets the eye in terms of Mega Man Zero/ZX Legacy Collection's cover art. Toru Nakayama drew almost-full body artwork for Zero and Vent which had to be squeezed to fit packaging dimensions. This could have been a nice addition to the gallery, too, but it's not there.

Moving away from all this, let's focus on the Mega Man ZX Series. You may have the temptation to tell me that "maybe there is no more artwork for the ZX series in the gallery because it doesn't exists." Well, more actually does exists and, in some cases, it's one click away, stored in Capcom's very own servers. Let me explain...

Now, go back to the top of the article and read Kazuhiro Tsuchiya's words again. Feels like he is talking about a different gallery that was not included in this collection, doesn't it? Even if we are generous, the new or newish stuff in the gallery only accounts for lees than the 3% of the total gallery. I think you can agree with me that they didn't do the best job they could.


Don't get me wrong, the gallery is great. It has 673 pieces of beautiful artwork and concept art. You will find some art here that was previously only available with a watermarks from different gaming sites, or art that was printed in strategy guides that was not reproduced in their entirety. There's also a few things that you can find in the gallery in bigger size as opposed to a tiny image in the corner of an artbook page.

At the end of the day, I can't help but to finish this opinion piece with a bitter taste. Maybe if Mega Man ZX 3 is made some day, they will take the chance to make an artbook - an actual ZX Complete Works - and dig deeper in their archives because there is definitely more art for the ZX Series than what they have put in this collection.

We will be showing some of the new art not included in the collection in a couple of days alongside a new interview with Toru Nakayama, keep your eyes peeled to the blog, is going to be worth your time!

A final, fun note: the artwork and concept art featured in the banner of this article is also absent from this collection's gallery.
Posted by Reploid21XX at 10:45 PM